To the application of the ELS Independent Research Center together with the Association for Civil Society Development in Azerbaijan concerning conducting joint “Exit – poll” survey during the October 15 presidential elections was received a positive reply from the Central Election Commission (CEC). So, the above mentioned organizations had got official right to conduct the joint “Exit – poll” survey during the presidential elections. It should be mentioned that according to the September 19, 2008 decision of the Central Election Commission (CEC) the non – governmental organizations planning to conduct “Exit – poll” survey must apply in written form in order to get accreditation 20 days before the voting day. At the same time the legal documents of the applying non – governmental organization and written information about the ways and facilities of conducting the survey must be submitted to the CEC. The CEC is considering the application during the 10 days since the day of receiving the application, the documents submitted are checked and the decision on whether to provide accreditation or not is made. END_OF_DOCUMENT_TOKEN_TO_BE_REPLACED 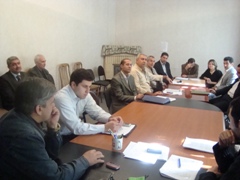 The “ELS” Independent Research Center had implemented the final training for coordinators concerning the “Exit – poll” survey. To the coordinators that are going to conduct control interviewers and supervisors’ assembly and their work during the voting day were additionally informed about the importance of the survey. There was told about the coordinators’ duties during the “Exit – poll” survey implemented on the voting day. The ways of interviewers’ treating with voters, the use of questionnaires during the survey, eradication of problems that might be occurred and coordinators’ responsibilities in those cases were explained. END_OF_DOCUMENT_TOKEN_TO_BE_REPLACED

At the October 2 meeting of the Central Election Commission (CEC) was considered the issue of accreditation for local NGOs planning to conduct the “Exit – poll” during the presidential elections. Based on the decision of the CEC applications of the Association for Civil Society Development in Azerbaijan and the ELS Independent Research Center, the Independent Consulting and Assistance Center, “Rey” Monitoring Center concerning the “Exit – poll” survey were received positive reply. The information about it reflecting the decision of the CEC was presented on local mass media, information agencies, news portals, TV and Radio channels. END_OF_DOCUMENT_TOKEN_TO_BE_REPLACED

The “ELS” Independent Research Center has organized trainings for the interviewers and supervisors that are going to conduct the “Exit – poll”, telephone operators that will be receiving the data sent by the observers that will be involved to the “Quick – count” and operators who will be processing that information on computers. The ways and accuracy of registering the information during transferring data on “Exit – poll” were explained to the persons who are going to participate as telephone operators.
At the same time, during the training there was trained the process of transferring and receiving the data and the participants’ questions were answered. END_OF_DOCUMENT_TOKEN_TO_BE_REPLACED

The “ELS” Independent Research Center had conducted trainings for interviewers and supervisors that are going to participate on “Exit – Poll” surveys conducted at the territories of Goranboy, Ganja, Goy – Gol, Shamkir, Agstafa, Gazakh, Tovuz and Gadabay regions during October 2 – 5. The training organized in second stage was conducted on October 2 in Ganja and Goranboy. On this training there was given information to the participants about the context of the “Exit – Poll” planned to be conducted during the October 15 presidential elections. END_OF_DOCUMENT_TOKEN_TO_BE_REPLACED