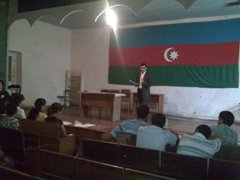 The “ELS” Independent Research Center had organized trainings for interviewers and supervisors that are going to work at the polling stations covered by “exit – poll” on October 6 at the territory of Sheki, Gakh, Zagatala and Balakan regions. The first training was conducted in Sheki. During the training they were explained about activities considered to be implemented on “exit – poll”, as well as their duties and responsibilities. The forms of questionnaires were presented on this training by the trainer. Besides, the ways of using those corresponding documents were explained too. As some of the interviewers’ age were not corresponding the rules they were substituted with new ones during the training. The questions that participants of training were interested in were answered by trainer at the end of training.
The training was organized for interviewers and supervisors are going to work at the polling stations covered by the “exit – poll” in Gakh region too. It should be mentioned that participation of persons with higher education on the trainings conducted in this region had given the opportunity for the trainer who conducted training to conduct training easily. END_OF_DOCUMENT_TOKEN_TO_BE_REPLACED 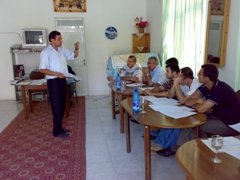 The second stage of trainings concerning the “Exit – poll” survey were conducted in Shirvan, HajiGabul, Sabirabad, Beylagan, Imishli and Saatli regions on October 3 – 4 by the “ELS” Independent Research Center. On the training organized in Shirvan city on October 3 participated interviewers and supervisors working at the polling stations of Shirvan and Hajigabul regions covered by “exit – poll”. On the training the participants were explained about the concept of “exit – poll” and about conducting it according to the relevant rules. Besides, at the training the participants were informed about the ways of using questionnaires applied in “exit – poll”. END_OF_DOCUMENT_TOKEN_TO_BE_REPLACED 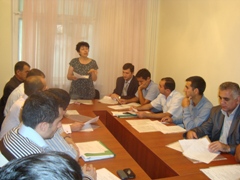 The first stage of the trainings conducted by the ELS Independent Research Center concerning the “Exit – poll” survey planned to be implemented on the voting day together with the Association for Civil Society Development in Azerbaijan had completed. At the first stage of trainings on the “exit – poll” survey that is going to be conducted in all the territory of the country at all constituencies and polling stations had participated more than 100 interviewers and 200 supervisors. The interviewers and supervisors were informed about the “exit – poll” and the ways of how to conduct it. END_OF_DOCUMENT_TOKEN_TO_BE_REPLACED