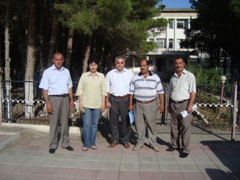 The “ELS” Independent Research Center had organized trainings in Salyan and Neftchala cities for interviewers and supervisors are going to participate on “exit-poll” on September 13. At the first stage, there were involved 12 interviewers, 3 supervisors and 4 persons considered as reserve that are going to work on the polling stations covered by the “exit-poll” at the territory of Salyan region. Mr. Nazirmammad Guliyev had joined to these trainings as a trainer. At the same time the chairwoman of the “ELS” Independent Research Center Mrs. Irada Yagubova had also participated on training. END_OF_DOCUMENT_TOKEN_TO_BE_REPLACED 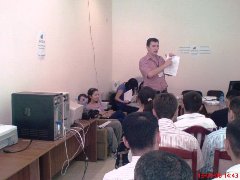 The “ELS” Independent Research Center had conducted trainings on September 13 and 14 for interviewers and supervisors that are going to conduct “exit – poll” during the October 15 presidential elections. A big number of interviewers and supervisors had participated at the organized trainings in Lankaran on the first day of the seminar. The trainers came back from Lerik conducted training again to 7 persons who did not participated at the seminars because of different reasons after the training in Lerik completed. It should be mentioned that the representatives of OSCE Mr. Jose Luis Menendes and Ms. Botagoz Abilova had also participated at this seminar. END_OF_DOCUMENT_TOKEN_TO_BE_REPLACED 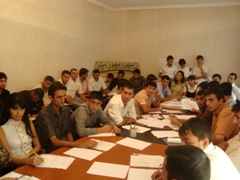 Interviewers and supervisors going to conduct “Exit-poll” on constituencies and polling stations on the day of presidential elections at Baku and Absheron region were involved to trainings from 12th to 16th of September. On trainings conducted in different times the persons going to conduct “Exit-poll” surveys at polling stations on the election day at Yasamal, Sabayel, Binagadi, Sabunchu, Nizami, Nasimi, Azizbayov and Narimanov districts of Baku. During these trainings their tasks and responsibilities were explained to interviewers and supervisors. At the same time the participants became familiar with relevant documents planned to be used during “Exit-poll” on the voting day. They were provided with details on rules of how to fill in these documents. The trainers answered to the questions asked by the participants at the end of the trainings. END_OF_DOCUMENT_TOKEN_TO_BE_REPLACED