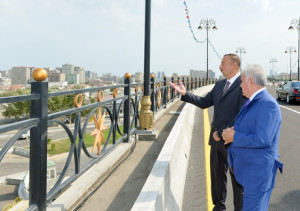 President of the Republic of Azerbaijan Ilham Aliyev has attended the opening of a multi-tier road junction on the intersection of Ziya Bunyadov Avenue and Abdulvahab Salamzade Street, Ali Mustafayev Street and Huseynbala Aliyev Street (“Khutor circle”), APAreports. Important steps have been taken in Azerbaijan in recent years to modernize the road infrastructure. This includes the construction of numerous road junctions, bridges, tunnels, underground and above-ground pedestrian crossings in the capital and regions.

The country`s road infrastructure is being modernized in line with international standards in accordance with the “State program on the renewal and development of the road network in Azerbaijan for 2006-2015”. As a result of the consistent steps carried out within the program, different road infrastructure facilities are being built and put into operation with high quality.

The improvement of the road transport system as a social measure is also an indicator of the economic strength of our country. The ambitious infrastructure projects implemented in the country at the current stage are evidence of the fact that the successes of recent years not only fully unlock the potential of Azerbaijan, but also confirm that the steps calculated for the future development of our country are taken in the right direction.

According to an order of President Ilham Aliyev, work is also under way on projects to improve traffic management and the road infrastructure in the city of Baku.

The multi-tier road junction on the intersection of Ziya Bunyadov Avenue and Abdulvahab Salamzade Street, Ali Mustafayev Street and Huseynbala Aliyev Street (“Khutor circle”) is one of the most important road and transport infrastructure facilities. It will greatly contribute to the elimination of traffic congestion and ensuring of people`s comfort.

Transport Minister Ziya Mammadov informed the President about the work done. It was said that three tunnels, a bridge and two pedestrian crossings were built on the road junction. The tunnels are 880, 827 and 450 metres in length. Two tunnels are 10.5 metres in width, while the other one is 22 metres. The state-of-the-art bridge on the junction is 630 metres in length and 12 meters in width.

The bridge on the road junction will provide for easy movement of vehicles from Abdulvahab Salamzade Street to Rashid Mammadov Street and back. This, for its part, will ensure unhindered traffic from Galaba Square to micro-districts and in the opposite direction. The road was previously too narrow, which hindered traffic and led to its congestion. Along with resolving the traffic congestion problem, the construction of the road junction indicates the size of the transport infrastructure projects in the capital city.

According to the project, access and above-tunnel roads were built at the interchange. Green areas were laid out and children`s amusement facilities installed on above-tunnel roads. A parking lot was also created here. All communication systems, including water, heating, gas and drainage lines were changed. The construction of this state-of-the-art road junction once again proves that continuous work is being carried out to tackle traffic congestion in the capital.