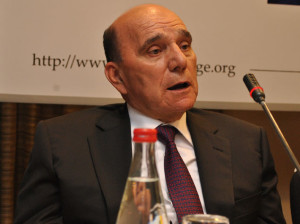 The motion of the PACE Presidential Committee “On the possibility of humanitarian catastrophe of Sarsang reservoir in the occupied territory of Azerbaijan” has today been approved at the PACE Bureau meeting in Dubrovka, Elkhan Suleymanov, a member of PACE in Azerbaijan and president of Association for Civil Society Development in Azerbaijan (ACSDA) told APA. He said that the motion has been submitted to the Committee on Social Affairs, Health and Sustainable Development for appointment of the rapporteur. The draft resolution basing on the motion is expected to be discussed at the plenary meeting of the Assembly.

The document strongly condemns the fact that Armenia has illegally blockaded water supply and irrigation systems in Azerbaijan’s territories violating international legal forms and considers the abuse of this power by Armenia inhuman. The Assembly urges Armenian military forces to hand over the illegal control over the reservoir and all related irrigation systems to the Azerbaijani authorities basing on previous resolutions. The draft calls on the international community to take urgent measures to prevent the plans of military provocation and be ready for any natural catastrophe that will result in human losses.